Take a second to look around your property. Do you see an ugly gray, green, or beige box somewhere, sticking out like a sore thumb? Wouldn’t it be great if you could just make it…disappear? 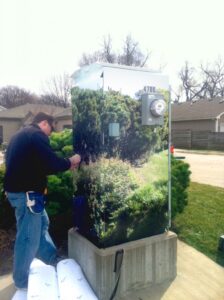 Unfortunately those cubes of equipment have to be present for cable tv, phone or electrical service to function in your home or business (not to mention your neighbors). You could put a privacy fence around it, or shrubs, but it has to be accessible to service people should the need arise to get to the innards.

Making an ugly box go away is exactly what our client had in mind when they approached Beeline and Blue. The Greater Des Moines Public Art Foundation is an organization that attempts to place art in public spaces through public & private collaborations. Their belief is that “…identity, distinctiveness and relevance can be added to a specific site by integrating the works of art and creative thinking into the design aspects of our built environment.” 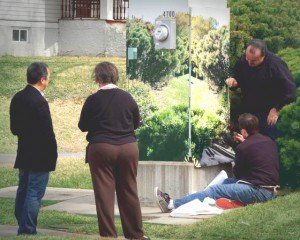 This project they dreamed up personifies that statement and then some. The idea is not unique to Des Moines. It has been done in many metropolitan areas including Rochester, NY and Los Angeles, CA as well as in other cities around the world. The catalyst for this project was an ordinary citizen here in Des Moines who chose not to be publicly known, but the idea was passed along to the Foundation by the City’s offices.

The Greater Des Moines Public Art Foundation subsequently took the idea and ran with it. In August of last year, the GDMPAF Board of Directors agreed to support a prototype. Working with the City Engineering and City Manager’s offices, as well as Beeline and Blue, the nitty-gritty details were ironed out, and in December the City Council approved it. King Au of Studio Au in Des Moines was approached and his curiosity was piqued, leading him to donate his renowned photography skills to the project.

With everything coming together so well, the Foundation and an anonymous Des Moines citizen decided to foot the bill. Beeline and Blue was involved in the early stages, providing consultative services to the Foundation and the city as they negotiated the logistical and physical obstacles of applying art to utility equipment. Once all the loose ends were tied up, Beeline and Blue produced the final image on stickyfied vinyl and lovingly wrapped the designated receptacle.

The photos say it all, this venture was a profound success! Beeline and Blue is proud to have had a hand in making this project happen, and we hope to be involved in future endeavors to assimilate art into everyday life. Thanks Greater Des Moines Public Art Foundation for being committed to beautifying our fair city!